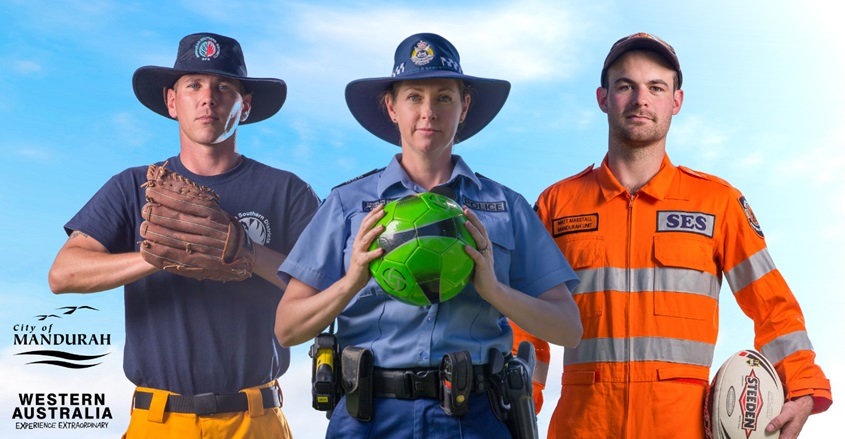 The City of Mandurah could be the safest in Australia for the next week as it plays host to the 2018 Australasian Police & Emergency Services (AP&ES) Games.

More than 3,000 serving and retired personnel and registered volunteers from police and emergency service agencies will compete in Mandurah for the 17th Games, running from 28 October to 3 November.

The Games officially commence Sunday night with a major Opening Ceremony on Mandurah’s eastern foreshore from 6pm. Members of the public are warmly invited to attend this event, which will include a torch relay, a parade of competitors, official welcomes, live music and fireworks.

A cycling criterium will also be staged through the afternoon along Mandurah Terrace, allowing crowds to watch competition before the Opening Ceremony.

“The Games provide a unique opportunity for members of the community to show their appreciation for the fine work carried out every day by our emergency responders right across Australasia,” said Deputy Commissioner (Specialist Services) Stephen Brown. “The public events like the Opening Ceremony in particular will allow people to display their support first hand, while also enjoying some wonderful entertainment and the beautiful facilities Mandurah affords.”

Joining the strong contingents from interstate will be more than 200 international competitors from New Zealand, China, Singapore, Hong Kong and New Caledonia. An additional 7,000 supporters, officials and volunteers are also expected to attend.

More than 50 sporting events will be staged across the Games, organised by the Western Australia Police Sports Federation. Traditional team and individual sports are supplemented by specialist events that showcase specific work skills, such as shooting, fire truck pull and surf lifesaving.

“We promote this event as Extraordinary Games for Extraordinary People,” said DC Brown. “For the competitors, it’s a chance to socialise outside of the stresses of their working lives in a positive environment that fosters physical and mental benefits. This is all about collaboration, competition and comradery.”

On the business side, the Games are projected to inject $2.5 million into the WA economy. The majority of the services associated with managing this event are sourced locally, providing opportunities for many small, medium and large businesses within the Mandurah region.

The first Games were held in 1984 and are now conducted every two years as the Australasian Police & Emergency Services Games in a different State/Territory of Australia or New Zealand.