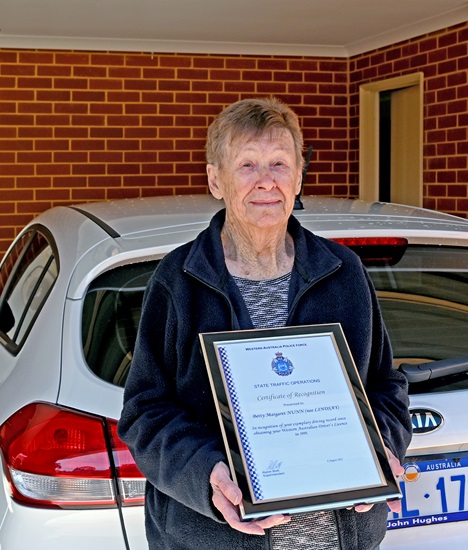 TEG South OIC Senior Sergeant Simon Underwood awarded a Certificate of Recognition to Betty on behalf of State Traffic. “Betty obtained her driver’s licence on 3 March 1959 in New Norcia after being taught to drive by her husband,” he said. “She recounted her very first driving lesson during which she didn’t even get into the car, instead learning how to change a tyre.”

While it’s not polite to ask a lady her age, Betty is now in her nineties and still driving. “To have an unblemished driving record at any stage of life is a great achievement, and while she was initially a little surprised to be receiving a visit at home by police, she was over the moon to be recognised in this way,” S/Sgt Underwood said.

For her part, Betty believes the most important thing a driver can have is manners. “Be polite on the roads and everyone will get where they’re going safely,” she said.