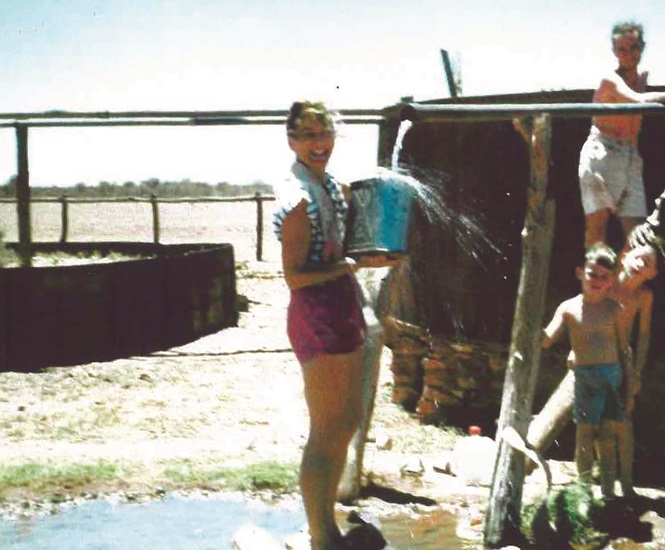 The combined efforts of South Australia Police and the WA Police Force have been of great assistance to an elderly lady and piqued the interest of officers on both sides of the border.

For Wembley OIC Senior Sergeant Peter Gilmour, it was a case of completing the circle for 96 year-old Catherine Evans, a Wembley resident who had written to the OIC in Marla SA.

A short extract from her letter explains:

"In 1953 my husband Jack, who worked for the Commonwealth Government, was transferred to Darwin. Each couple of years with my husband and four sons we drove back to WA during his leave. In 1956 we drove down the Stuart Highway as far as Kingoonya and then took a short-cut, passing the gate of Lake Everard Station on the way to Wirrulla. We stopped at what was known at the time as Marlo Bore."

Catherine went on to ask for some up-to-date information about the area and Marla Police Station Sergeant Darren Connell was happy to oblige. "Unfortunately she has not left a phone number or email address for me to respond in a more timely fashion, and as such I am hoping it won't be too much trouble for a couple of the troops to take a few pictures around if I email them to you?" Sgt Connell asked in an email to Wembley Police Station. "If you wouldn't mind getting one of your members to maybe print them out and hand deliver them to Catherine that would be appreciated," he added.

S/Sgt Gilmour said a wealth of information was sent to him and he visited the couple at their home to provide the update personally. "Sometimes it's the little things that mean the most, and Catherine and Jack were extremely appreciative," he said. "They have lived really interesting lives, and had kept diaries of all their travels. Catherine is in the process of transferring all of their adventures onto a computer which got her wondering about this location. Her online research led her to discover the name change from Marlo to Marla."