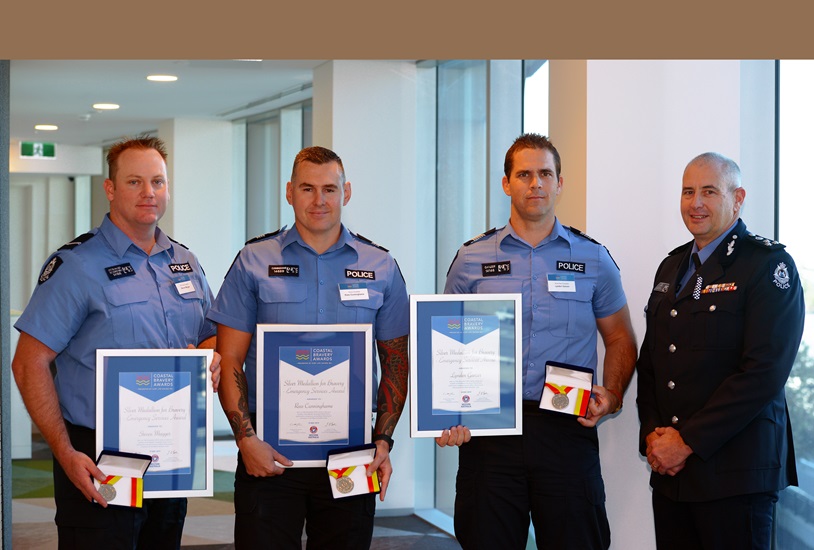 The honour is awarded any member of a recognised emergency response unit who, in the fulfilment of their duties, performs a conspicuous and selfless act of bravery on the West Australian coast during the preceding 12 months.

In Broome, a man was dragged out to sea by large tides and rough conditions after he fell into the water at Gantheaume Point. Hearing screams for help, passer-by Anthony Walker dived in to help and was able to reach the man and hold his head above water.

Senior Constable Ross Cunninghame and Acting Sergeant Lynden Ganzer located the two men nearly 100m from shore, both struggling to stay afloat. The officers entered the water, swimming out towards the pair who continued to drift further out to sea on the strong tide.

Back on the shore, Broome Detectives commandeered a paddleboard which was used by First Class Constable Steven Mayger to reach the two males who by this stage were nearly 500m out. The men were able to cling to the board until help arrived by way of sea rescue.

Officers in attendance nominated Mr Walker for this award, stating that he acted selflessly by jumping into the water.The police officers themselves were deemed to have gone above and beyond their duty, entering the rough waters to go to the aid of the two men.

On Rottnest Island, emergency services were advised the Army Jetty had collapsed and people were trapped.

Rottnest Island OIC Sergeant Phil Cartledge and Senior Constable Paul Lloyd went to the assistance of a woman who had become trapped and pinned under the jetty by her foot.

Entering the cold waters underneath the collapsing jetty, initial efforts to release the woman by way of air pressure bags failed, SC Lloyd, used a lever and tremendous effort to move the concrete slab that had trapped the woman’s foot which enabled Sgt Cartledge to dive under the jetty to release her.

While many individuals were involved in the rescue efforts at Rottnest Island that day, subjecting themselves to hypothermia in the cold water and at risk of further collapses of the jetty, the officers were recognised for their selfless and brave actions, which undoubtedly saved lives.