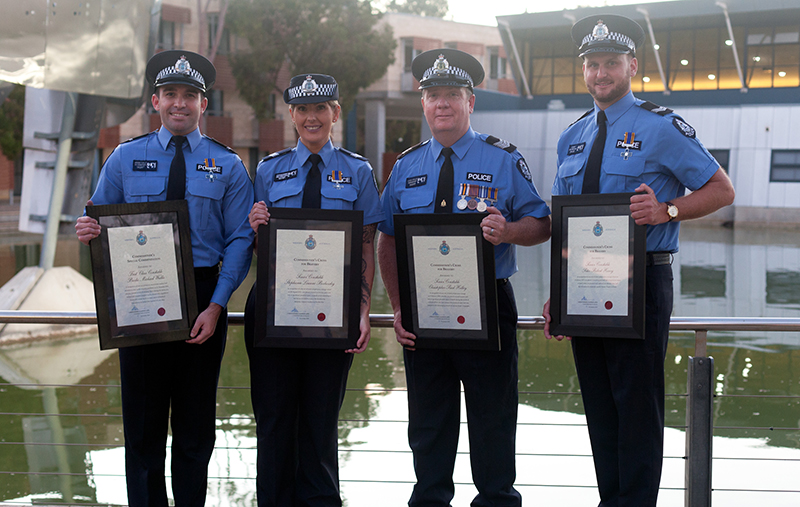 Police Commissioner Chris Dawson has presented awards to police officers who have put themselves at extreme risk by performing exceptionally brave acts.

This year the Commissioner’s Awards for Bravery acknowledge 51 individual Western Australia Police Force officers and one unit, relating to 24 separate incidents dating back to Dec 2012. One of the recipients received two awards for separate acts conducted in consecutive months.

The acts of bravery included several incidences of officers running in to burning buildings, diving in to unknown waters, averting self-harm attempts and apprehending violent offenders. Some worked alone, some worked with team members, some were even off-duty, but all displayed devotion to duty, often exceeding expectations.

Awarded for an act of most conspicuous courage whereby the person placed themselves at peril and risk of significant personal injury or death.

1/C Con Brodie Wallis
In November 2014, 1/C Con Wallis dived into an unknown body of water to try to save a drowning man at Greenbushes Pool, Greenbushes.

SC Steph Bochorsky
In August 2015, whilst off-duty, SC Bochorsky rescued two children from a life-threatening domestic violence incident in Doubleview. One young girl had been set on fire by her father, and her sister had been doused in fuel. Earlier this year SC Bochorsky’s actions also earned her the inaugural Police Bravery Medal.

SC Christopher Holley
In February 2018, SC Holley rescued a female driver who had crashed into a body of water and was trapped in the submerging vehicle in Layman Road, Geographe. Flagged down by another motorist, he acted quickly to smash the back window to free her from the vehicle, cutting his arm in the process.

SC Peter Henry
In January 2017, SC Henry pursued and captured an armed offender who had fled the scene of a fatal stabbing outside Wesley Church in Perth. The man was still wielding a knife when he was arrested by SC Henry.
This incident also features in Commissioner’s Commendations.

Awarded for an act of bravery, meritorious conduct and devotion to duty under stressful conditions whereby the person placed themselves at risk of personal injury, the action exceeding that which might reasonably be expected.

1/C Con Daniel O’Keeffe
Con Hayden Counsel
In May 2016 in Geraldton, these officers led a team of six other officers and other emergency service workers in the rescue of a trapped swimmer. The teenage surfer’s arm was wedged in a rock wall with waves crashing over him and submerging him.
This incident also features in Commissioner’s Commendations.

1/C Con Brodie Wallis
1/C Con Ian Harris
On New Year’s Eve 2014, these officers rescued a mother and daughter trapped inside a house fully engulfed in flames and smoke due to an arson attack in Bunbury. 1/C Wallis had been involved in another incident of bravery only the previous month, as detailed in Cross For Bravery.

1/C Con Kurt McCain
Con Jeremy Forster
In January 2016, these officers rescued and resuscitated a female swimmer in Bunbury. The woman had been drinking that night and was unconscious when they reached her and brought her back to shore.

Sgt Laurie Morley
In October 2015, whilst off duty and alone in Harvey, Sgt Morley broke up a fight involving 10 people, arresting the offender and sustaining significant personal injuries.

1/C Con Matt Boobbyer
1/C Con Brian McNaught
In March 2015, these officers rescued a female threatening to commit suicide from the top of a two- storey building in Hamilton Hill.

Name withheld
In December 2013, the officer confronted and apprehended an armed offender at the Swan View Shopping Centre.
This incident also features in Commissioner’s Commendations.

Awarded for meritorious conduct and devotion to duty under stressful conditions, whilst in the execution of his or her duty.

SC David Mees
S/Sgt Jodie Pearson
In October 2013, these officers knowingly placed themselves at personal risk whilst manually handling a highly volatile explosive device in Perth. The device was eventually detonated in a controlled explosion.
This incident also features in Group Citation for Conduct.

Con David O’Rourke
In June 2017, Con O’Rourke was part of a team who forced entry into a burning house in East Victoria Park and successfully extracted a violent armed offender.
This incident also features in Special Commendations.

SC Jason Duncan
In January 2017, SC Duncan pursued and assisted SC Henry in the capture an offender who had fled the scene of a homicide outside Wesley Church in Perth.
This incident also features in Cross for Bravery.

Sgt Andrew Fisher
In March 2017, Sgt Fisher was off-duty in East Victoria Park when he captured and detained an offender fleeing from a crashed stolen vehicle, pending the arrival of Police.

1/C Con John Kapinga
In February 2015, whilst off duty, 1/C Con Kapinga used his negotiation skills to diffuse an incident in Hillarys involving an offender armed with a knife.

SC Russell Tindall
SC Michael Kelly
Sgt (Brevet) Jennifer Boyle
Det 1/C Con Aaron Ogg
1/C Con Shane Byers
In March 2015, these officers scaled down a rock face into the rough ocean to save the life of a person who had fallen from a lookout onto the rocks at Cemetery Beach, Port Hedland.

Sgt Matthew Donkin
Sgt Raymond Ballerini
In June 2014, these officers arrested a violent offender in and around Nedlands and Crawley.

SC Stephen Jakubans
Con Christine Toop
In May 2014, these officers tackled and restrained a man who had covered himself in fuel and was threatening to set himself alight in Thornlie.

SC Aaron Homan
Con Patrick Kerrigan
In May 2016, these officers rescued a driver trapped in a burning vehicle in Bibra Lake.

Con Sean Roman
Sgt Simon Harrison
1/C Con Ryan Hayter
In December 2017, these officers rescued and attempted resuscitation of a citizen from the United Kingdom whilst on a boat trip off the coast of Dampier.

Name withheld
In December 2013, the officer confronted and apprehended an armed offender at the Swan View Shopping Centre.
This incident also features in Special Commendations.

Awarded to a team/unit/district for displaying a significant level of commitment, dedication and professionalism to their duty in extenuating circumstances that reflects credit upon the Western Australia Police Force.

Bomb Response Unit
In October 2013, the unit displayed a significant level of commitment, dedication and professionalism to duty in extenuating circumstances, involving a highly volatile explosive device uncovered in Leschenault Estuary and eventually detonated in a controlled explosion.
This incident also features in Commissioner’s Commendations.

Note: Some details have been withheld at the request of officers