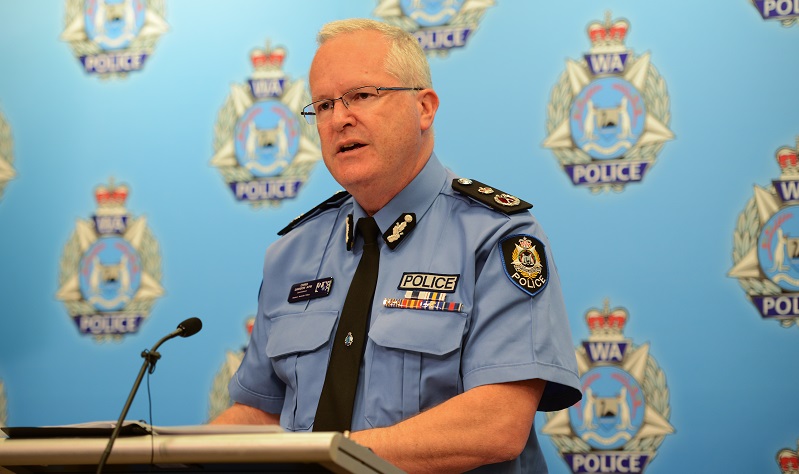 The Commissioner of Police has announced a number of changes to the Western Australia Police Force following a 'snapshot' review of the organisation.

The seven week review examined submissions from the workforce and conducted a series of interviews with senior management and frontline officers.

Commissioner Chris Dawson said the review was intended to shine a light on the state of the organisation to help inform decision making and the direction for the next five years.

Mr Dawson told his senior management team today of an ambitious plan to implement a number of significant changes in a phased approach by 1 July 2018.

There will be a transition to an eight District model across the metropolitan area with the names of the districts reflecting the major centres in each geographic location.

Each District will have a Superintendent and three Inspectors to improve the control of policing resources and the delivery of policing services to the community.

Metropolitan policing will now be overseen by one Assistant Commissioner with Commanders North and South.

The districts will be Perth, Midland, Mirrabooka, Joondalup, Armadale, Cannington, Fremantle and Mandurah.

“While there has been extensive planning and implementation over the past few years of the Metropolitan Operating Model, the extension from four to eight Districts will provide locally focussed management across the extensive metropolitan area," Commissioner Dawson said.

"Importantly, officers will be deployed from a centralised State Operations Centre which will have enhanced coordination and greater control over resources," Commissioner Dawson.

This transition will require careful integration over the next six months.

The purpose built Maylands Incident Control Centre, usually reserved for major and critical events, will be activated as a 24/7 centralised communications hub, to be known as the State Operations Centre.

This facility was subject of a major investment to coordinate the major operation covering the Commonwealth Heads of Government Meeting in 2011.

The resources of the current State Control Centre at Police Headquarters and the four District Control Centres located north and south of the metropolitan area will now be integrated at the Maylands facility to provide better co-ordination and response.

This facility will also be available for multi-agency coordination during planned major events or in a State emergency.

A new portfolio has been established with an Assistant Commissioner and two Commanders to coordinate major programs, develop operational performance frameworks and coordinating the planning to deliver a frontline mobility solution.

Commissioner Dawson said, “Police officers must be equipped with the right technology to improve police response and services to the community”.

Commissioner Dawson outlined his commitment to tackling the meth crisis by enhancing the organisation's investigation, intelligence and surveillance capabilities.

He cited better co-operation and integration across government agencies as critical for WA Police to maximise the government's election commitment to fund 120 extra FTE.

The review made a number of other findings and recommendations which include;

Commissioner Dawson said the way forward would have to take account of forecast budget savings of $250 million over five years.

"The independent consultant’s report has only just been provided to the senior executive which has been asked to respond to the findings." he said.

"Some of the Review Findings require further examination and deliberations. Given the significant changes already announced I am not willing to create uncertainty or speculation by releasing all of the review findings prematurely."

Commissioner Dawson also announced a number of other changes to the look of his corporate executive in a move he said would reinvigorate and strengthen his team for the significant work ahead.