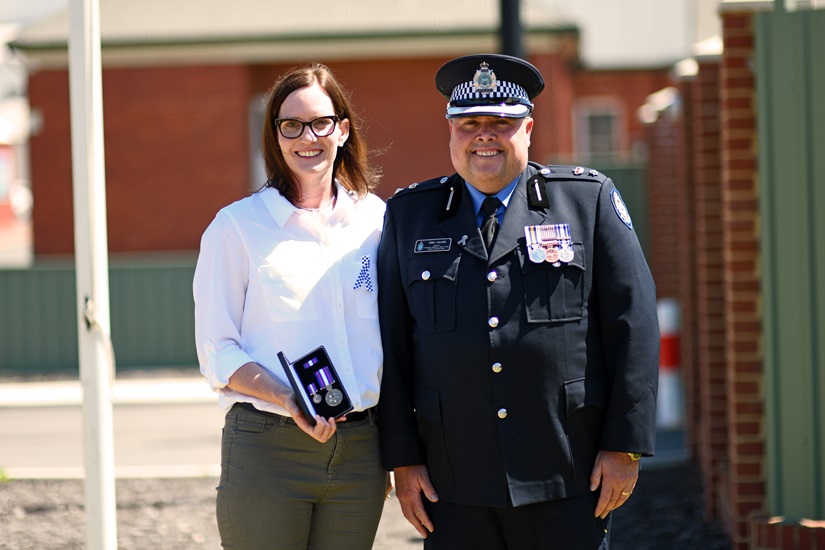 His granddaughter, Dr Julienne Roe, accepted the medal in her grandfather’s honour.

Detective Roe was born in Northam in 1912 and joined the Western Australia Police Force in 1936.

On 21 October 1946, Detectives Roe and Jerry Parker attended an address in Claremont to interview a man and a woman; 26-year-old Sydney Hammond and his wife, 18-year-old Cecilia Hammond.

Mr Hammond was subsequently arrested for breaking and entering and stealing offences. He was placed in the back of a police vehicle and taken to a nearby garage where property matching items recently stolen was identified.

During a series of short trips between the offenders’ flat and other locations of interest, Mrs Hammond stealthily armed her husband with a 0.22 palm pistol.

While being transported to a police station, the pistol’s muzzle was jammed into the small of Detective Roe’s back and three shots were fired in quick succession.

While the police car was still moving, Mr Hammond leapt from the vehicle and ran away with the pistol still in his hand. Though badly bleeding and unarmed, Detective Roe flung himself out of the car in pursuit of the fleeing Hammond.

One of the bullets hit Detective Roe in the right side of his chest and the other in his left temple, causing his death.