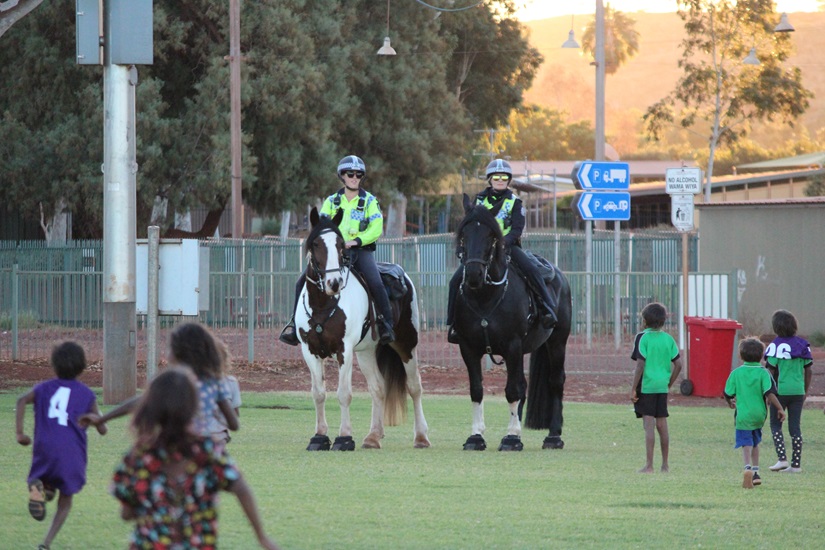 Police officers on horses and bikes have been enthusiastically received by members of the Newman community during recent proactive patrols in the Pilbara town.

The officers were in Newman as part of Operation Mnemonic and an additional benefit proved to be positive engagement with community members. Mounted Officers First Class Constable Stacey Lickfold and Senior Constable Claire Wyartt even managed to visit all three of Newman’s schools to give students an insight into the type of work they do from horseback.

Newman OIC Inspector Mark Fleskens said in addition to patrolling, horses and riders were often approached for photos by residents and youth who otherwise might not have interacted with a police officer. “The engagement levels they achieved were nothing short of fantastic,”he said.

The Mounted officers also attended the weekly Nightfields football clinic, and were able to see local police having races with the kids as part of the training schedule. “From their elevated position they were able to witness the margin by which the kids left their colleagues in the dust,” Insp. Fleskens said.

“The bikes have also proved to be very effective, covering the CBD, residential and light industrial areas, including places police vehicles would find it difficult to get to ”Senior Constable Jess Renner is one of the officers who has been enjoying these patrols and said it has been great getting out on the bikes. “The community has loved the ability to interact with us and whether it’s stopping off at schools or walking through the shops, we’re more accessible to them,” she said.

Constable Aaron Doran added that it’s also a great way to catch up with youngsters wandering the streets at night and for approaching local hot spots without the giveaway sounds of a motor vehicle so you can see what’s really going on. “The visible presence of officers on bikes really seems to be appreciated and for the week when Mounted officers were here as well the community was buzzing,” he said.