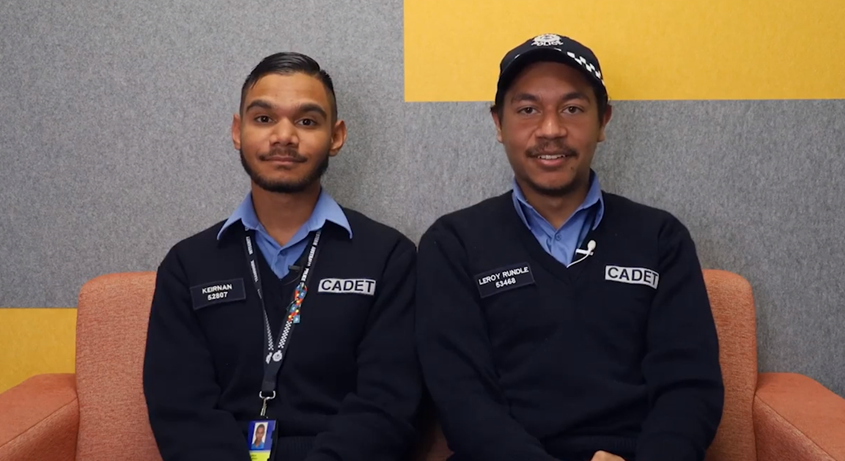 Cadets Ace Kiernan and Leroy Rundle arrived in Kalgoorlie in 2020 and 2021 respectively and the pair have made an immediate impact.

Acting Senior Sergeant Russell Hurst said both of these young men are part of the WA Police Force Aboriginal Cadet Program and since arriving in town have opened up lines of communication with the Aboriginal community and have been actively engaging with young Aboriginal men and women.

“Cadets Keirnan and Rundle are both astute and positive young men, committed to improving the relationship between the WA Police Force and the Aboriginal people,” he said. “The Cadets consider their position within the agency as the perfect platform to reach out and engage with other Aboriginal people of similar age and cultural background. Since commencing their positions in Kalgoorlie, they have personally attended both community and traditional cultural events as WA Police Force representatives.”

Recently, the Cadets participated in an interview with the City of Kalgoorlie-Boulder, discussing their perspective on their role and what reconciliation means to them. Both Cadets spoke proudly of their role describing themselves as ‘mentors’ and leaders in closing the gap between police and the Aboriginal community.

“As their supervisor I have had the pleasure of watching them learn, and encouraging them in both their personal and professional development,” A/S/Sgt Hurst said. “I’ve challenged them to aspire to new heights, setting personal goals and achieving mutually beneficial outcomes. I believe both Cadets are as inspirational to their peers as they are to their colleagues. They have each shared life experiences with us that most would not have been exposed to in their own lives.”

Both Cadets have expressed a true desire to apply to become police officers and continue their efforts in this field. The Aboriginal Cadet Program demonstrates the WA Police Force commitment to developing an inclusive workforce under the Reconciliation Action Plan, and is essential for increasing and maintaining alternative and positive lines of communication between Aboriginal people and the WA Police Force.

“Having being involved in supervising the Aboriginal Cadets here in Kalgoorlie, I truly encourage all officers, especially those in Regional WA, to promote the Aboriginal Cadet program and find the next Ace Kiernan and Leroy Rundle in their own communities,” A/S/Sgt Hurst added. “I look forward to seeing these young