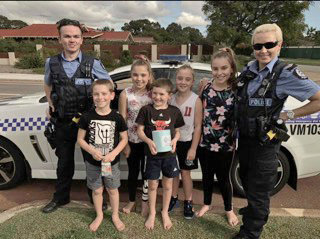 SC Long said she received a phone call from a parent in Leeming asking if a group of children could make a donation to WA Police Legacy. “The kids had been running a homemade lemonade stall, selling cups of lemonade for 50c each,” she said.

“Business was brisk and at the end of the morning, $38 had been raised. Since the front counter at Murdoch Police Station isn’t open during the weekend, I offered to bring the tin to them.”

SC Long and PC Huggins visited the nearby address with the Legacy charity tin, and the youngsters enthusiastically handed over their hard earned cash. “They were just so pleased to be able to give to charity. We thanked them for their generosity and explained their donation would be used to help young people like themselves who fall under the care of WA Police Legacy,” SC Long said.