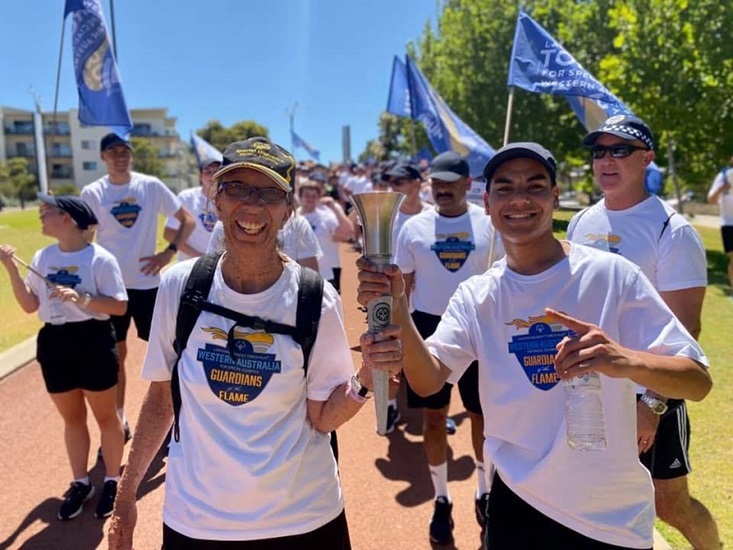 Law Enforcement Torch Run (LETR) WA has been involving officers from across the State in a Virtual Torch Run during May.

LETR Vice President Sergeant Chris Newman said many of the Special Olympic athletes have underlying medical conditions as well as a range of intellectual disabilities. “Because of COVID -19, Special Olympics (SO) Australia had no choice but to cancel all club events and training, leaving the athletes instantly isolated,” he said. “We recognised that without their usual training or LETR community events, many athletes needed encouragement to stay mentally well and physically active, so we launched the Virtual Torch Run.”

The goal was to record a distance equivalent to travelling from Police HQ to Kalgoorlie. With so many officers volunteering to add their kilometres to the athlete’s totals – whether by walking, cycling or running - the target was later extended to Karratha.

Video messages from police officers offered support to athletes, as totals were added to a virtual map which displayed overall progress. Click to see examples of how officers in Esperance, Leonora and Karratha inspired SO athletes.

Special Olympics Australia National Board member Tanya Brown thanks all LETR members and police officers for volunteering their time to the challenge. “This has really boosted the spirits of the athletes and encouraged them to connect with each other,” she said.

The mother of a SO soccer athlete said her son was out every day to add to the Virtual Torch Run total. “This was so motivating and inspiring, and just what Chris needed to feel less alone at this time,” she said.