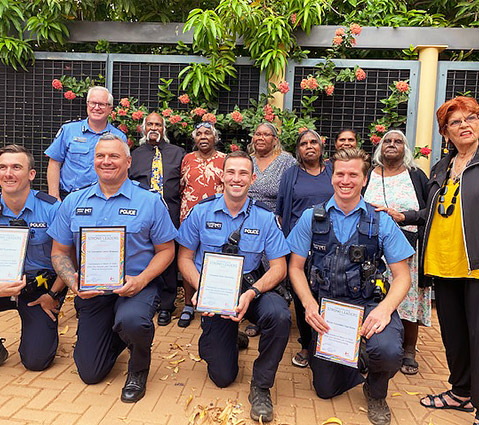 The actual incident occurred at around 1.30am on Friday 27 March, when the officers attended a house fire in South Hedland. They were immediately advised by residents standing outside there was a child unaccounted for.

Despite the risk to themselves, all officers immediately conducted a search for the child from the perimeter of the property, breaking windows and doors in a desperate attempt to locate him. At the time tensions were high and the officers also had to control and contain the scene to prevent harm to the other family members present.

Constable Morrissey spotted the child’s leg in the hallway of the property through a laundry door. He entered the house and called out to the other officers who joined him inside the burning building.

The child was found to be unresponsive and carried from the scene, where officers immediately commenced first aid until St John Ambulance personnel arrived. He was taken to South Hedland Health Campus prior to being flown to Perth by the Royal Flying Doctor Service.

The youngster was in a critical but stable condition for a number of days with burns to his face, neck and lungs. He also suffered carbon monoxide poisoning which medical staff are convinced would have killed him had he not been removed from the house when he was.

This incident was captured in body worn camera footage which dramatically shows how the incident unfolded and illustrates the exceptional bravery and conduct displayed by all officers. You can view the footage here.

Pilbara District Superintendent Kim Massam said there is no doubt the child’s life was saved due to heroic actions of officers. “The child has now made a full recovery and returned to the South Hedland community,” he said.

Maureen Kelly from the Hedland Aboriginal Strong Leaders is also sure the boy would have perished if it wasn’t for the bravery of the officers putting their own lives at risk to save him. “I think the Commissioner should be very proud of these officers and their actions,” she said.