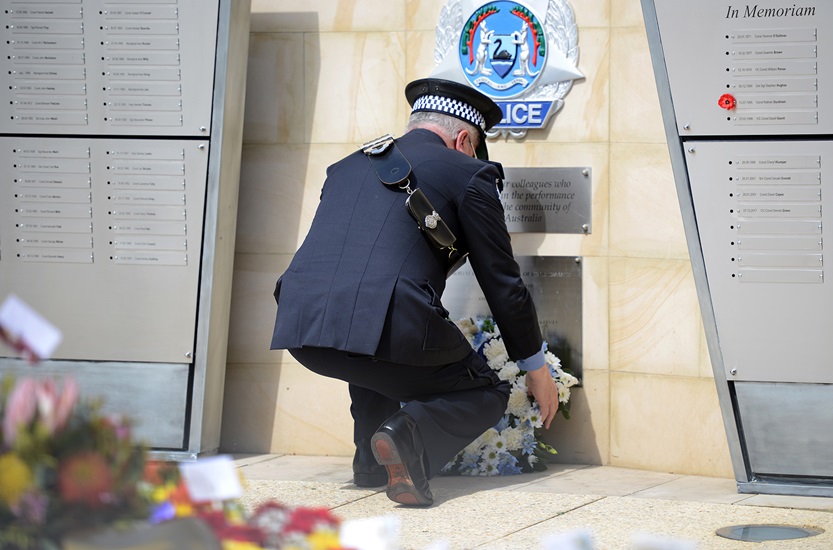 Western Australia Police Force Commissioner Chris Dawson and Police and Road Safety Minister Michelle Roberts have officiated at a ceremony at the Police Academy to acknowledge all police officers who have sacrificed their lives in the line of duty.

Since 1989, National Police Remembrance Day has been held on, or near, the 29 September of each year. On this day, the WA Police Force honours and remembers all fallen colleagues, along with other police organisations across Australasia and the South West Pacific Region.

Remembrance ceremonies are held in most Australian capital cities and in many regional centres and towns. The ceremony provides the opportunity to publicly remember those officers who have paid the ultimate price for ‘doing their job.’

A national symbol, the blue and white ‘Remembrance Day Ribbon,’ is worn as a sign of commemoration on National Police Remembrance Day. Worn on the right breast by police personnel and also members of the community, the ribbon lies close to our hearts to remember our fallen colleagues, friends and loved ones.

The WA Police Force has lost 85 men and women in the line of duty, the most recent being First Class Constable Dennis Green, who tragically lost his life in a traffic accident in West Toodyay in December 2017.

Within Australia, 789 police officers have been killed on duty, or died as a result of serving the community.