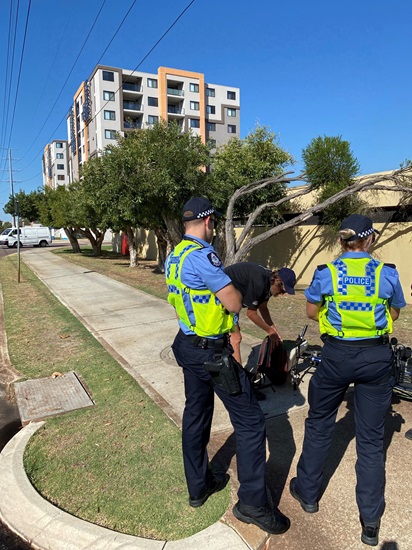 Additional funding for a summer crime campaign has seen officers targeting high harm addresses and individuals across the State.

“A highlight of the operation so far has been involving 22 Recruits from the WA Police Academy in our Op Heat Shield activity just before Christmas. They spent a day assisting and getting involved with the community.

“During patrols at a local shopping centre, Recruits helped a woman in her nineties – who hadn’t ventured into a large centre for decades – out of her car. They also encountered a sudden death and a child left unattended in a car which were all great learning opportunities, while their presence elicited a lot of positive reaction from the public.

“Having officers providing reassurance to the community during the summer months is a vital outcome of the operation and the mix of enforcement and engagement helps the community to see that police are genuinely making a difference.”

Operation Heat Shield runs from 1 December to 31 May. To date more than 700 offenders have been charged as a result of the increased police activity.

Watch a short video showing the Recruits in action here.