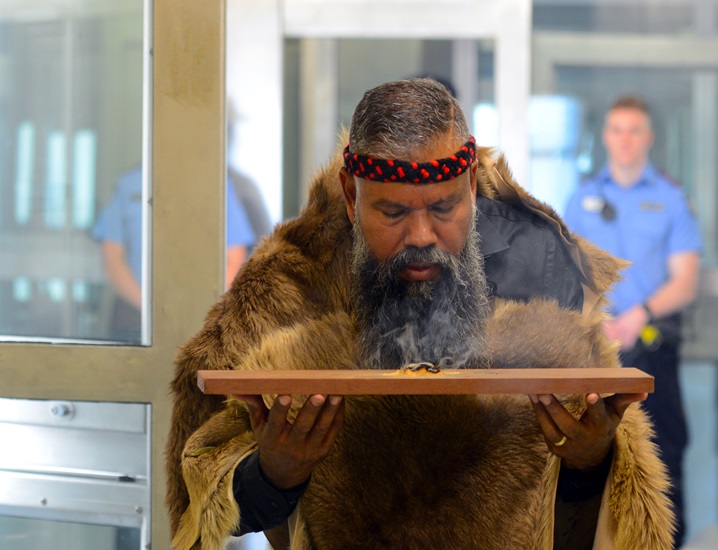 An opportunity to heal, cleanse and keep people safe was created during a smoking ceremony held at the Perth Watch House (PWH) last week.

In a first for the new PWH facility, a ceremony was conducted by Dr Richard Walley and Barry Winmar, who carefully planned and then delivered the formalities in conjunction with PWH staff.

Scientific research has established there are anti-bacterial and antifungal properties associated with the traditional Aboriginal custom.

On her last day as Custodial Services and Mental Health Division Superintendent, Kate Vivian said it was a privilege to be a part of the inaugural PWH smoking ceremony. “Aligned with NAIDOC week, the ceremony represents purification and unity in the Perth Watch House,” she said. “It’s hoped by cleansing our facility we will ward off bad spirits from all people in the PWH and the land it is located on, making it possible to keep all members of our community – detainees and staff – safe.”

PWH Sergeant Kristy Cannon said there is a focus on constantly striving to improve service delivery to detainees – who are also members of the community. “We believe this smoking ceremony will assist us further in providing a safer and more comfortable environment,” she said.

The ceremony began near the sally port, before Dr Walley circled the outside of the building and Mr Winmar visited each cell and communal space inside, finishing at the Magistrates Court.

Dr Walley concluded proceedings by performing a short piece on the didgeridoo, before praising PWH staff for their genuine engagement and commitment to the ceremony. “It means a lot that you have been so involved – after all we open up a portal to our ancestors during a smoking ceremony - and they would be proud of the way you have participated,” he said.