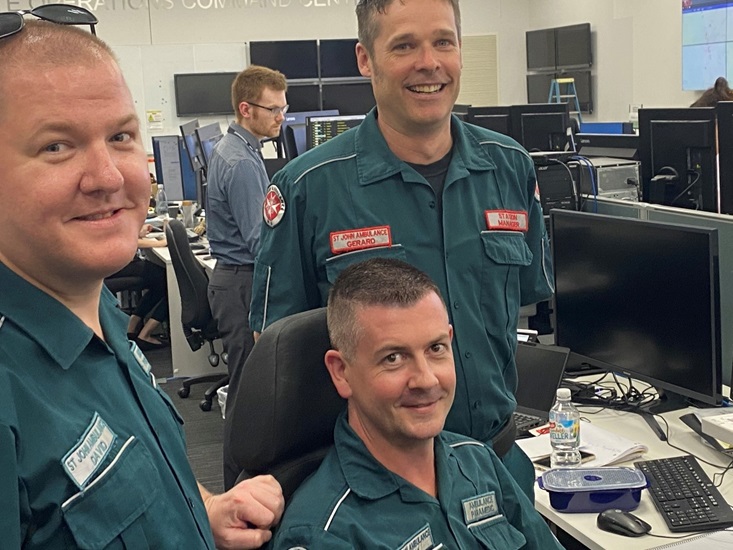 Coordinating the response of police and St John WA (SJWA) to emergency calls from across the State is behind a 12-month trial which began at the Police Operations Centre (POC) late last year.

Many of these calls saw both police vehicles and ambulances attending the same emergencies, operating in isolation to each other, on different systems, with sometimes different information, different situational awareness and different sources of intelligence.

The need for real-time information sharing and interagency support processes has resulted in the establishment of a SJWA Liaison Officer being located at the POC for 12 hours each day (midday to midnight), seven days a week, under the trial arrangements.

The three liaison officers are all qualified paramedics with long on-road ambulance experience, and present a wealth of knowledge in support of both St John and police operations.

Ambulance Paramedic David Robinson said their role within POC is as a point of contact for enquiries and exchange of information between St John and police. “We have access to both the WA Police Force and St John CAD systems and so have an awareness of all current jobs throughout the State,” he said.

Gerard Monks is a Station Officer with 22 years’ experience with St John and is also a former WA Police Force officer. “St John Liaison Officers value add to CAD in both systems, particularly where the safety of a paramedic and/or police crews may be at risk at certain addresses or locations, or when dealing with particular known individuals,” he added.

The last of the St John Liaison Officers is Liam Joynson. Liam is a former police staff member from the Police Assistance Centre and sees great benefits in developing a stronger relationship between police and ambulance. He has only just commenced in the role but has already seen the benefits of easier access to information sharing for the safety of both ambulance and police crews.

“Information is available on the spot and police and ambulance officers are not stuck waiting on the phone to each other’s operations centres,” he said.

Some of the benefits of the position include:

On the last point, there have already been examples of success with the coordination of responding units. Paramedic Robinson said that a few weeks ago there was a couple who were lost in bushland down South.

"The two mapping systems (police and SJWA) side-by-side meant I was able to ensure that both the police units and ambulance had the same exact location,” he said.

All three SJWA personnel are in agreement that the role is working for St Johns, and POC Inspector James Grant says the same is true for police.

"During the first full month of operation in January 2021, there were 1836 SJWA Liaison Officer interactions captured on police CAD, including around 1200 shared ETAs, 529 instances of other information being provided by St John and 86 instances of ambulances being diverted from police-related tasks,” he said.

“The take-up by police of the liaison officer role is also growing as awareness increases of their ready availability and eagerness to assist our frontline staff.”