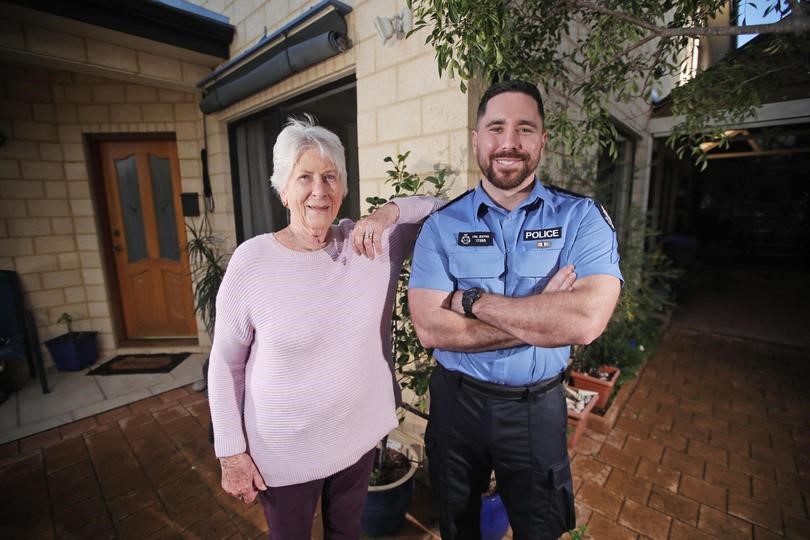 The first thought Vini Jenyns had when he heard a woman’s desperate cry for help echo across the street was that a home was being burgled.

Immediately, the then-police recruit turned towards where the helpless sound was coming from to find 83-year-old Ros Franklin “meekly” waving him down.

The temperature was pushing 40C degrees, and Mrs Franklin had been trapped outside for almost an hour.

“I could tell she’d been crying,” probationary constable Jenyns said. “She was really distressed, so I had to try to calm her down.

“We were covering burglaries at the academy at the time so that was my first thought, but then I realised she’d locked herself out and been stuck there in the heat.”

Ros Franklin was locked out of her Joondalup home in her front courtyard on a 42C day in January. Her front gate was also locked, meaning she could not leave the courtyard, and the probationary constable was able to help her regain entry.

Due to graduate from the WA Police Academy tonight, prob. const. Jenyns had only just started his third week of training when he came to Mrs Franklin’s rescue.

Because Mrs Franklin didn’t have her phone with her, and her husband was out, she hadn’t been able to call anyone for assistance.

Fortunately, prob. const. Jenyns said his training as a police recruit had prepared him for what came next.

"She had a seven-foot-high spiked fence around the back, so I jumped over that and then was able to let her in through the front,” he said. “We’d been doing the six-foot wall at the academy so I already had some good practice.”

Now, some six months later, prob. const. Jenyns is about to enter his second month “on the road” in the regional town of Onslow.

Originally from New Zealand, the 27-year-old has always had an admiration for police and the job they do.

Like him, his silver squad colleagues have been on the frontline for more than three weeks already, after their schedule graduation ceremony was postponed twice due to a COVID lockdown and a severe weather warning.

Prob. Const Jenyns is among 86 officers who will be graduating tonight, cheered on by a very grateful Mrs Franklin and her husband.