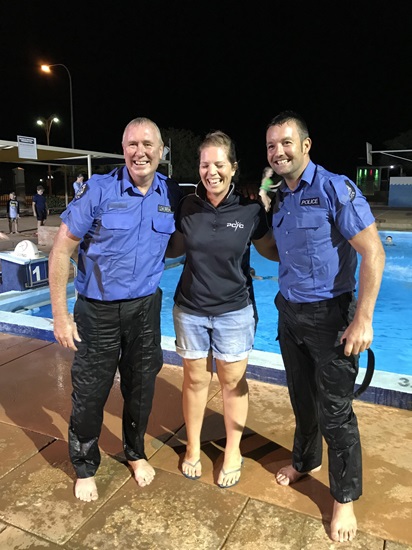 Police know it can be hard to keep their heads above water during the school holiday period, but in Exmouth this wasn’t for the reasons you might think.

Thanks to some great work by the local PCYC, young people had plenty to keep them busy, but they did end up pushing officers into the local pool as part of a fundraising venture.

Exmouth OIC Sergeant Craig Carter said as part of a school holiday ‘Pool Party’ included the prestigious prize of giving a local cop a dunking. "This year there was the added bonus of two first prizes on offer after Senior Constable Brendan Byrne and I both put our hands up to go for a swim," he said. "the only concern was that the lucky winners executed their winning shove with such enthusiasm it was a little bit scary.

“It was great to see the community come together and support the PCYC programs. You can’t place a value on the importance of positive community interaction, especially with the young ones.  For the kids to be able to talk with police officers in a fun and friendly environment goes a long way towards building positive relationships,” Sgt Carter said.

“Chatting with parents and children on the night it was clear our involvement was well received, and there were even a few hints at the prospect of attracting some new police recruits in the future.

“Police involvement formed part of our Youth Engagement Strategy, but the real work in terms of organisation was done by Exmouth PCYC Manager Lauren Rampling and her team, who not only ran the Pool Party, but also initiated a wide range of youth engagement events and activities over the recent school holiday period.

“All were well attended, and having plenty of opportunities for kids to get involved means police were able to keep their heads above water and meant our interactions with young people were kept positive.”
More...