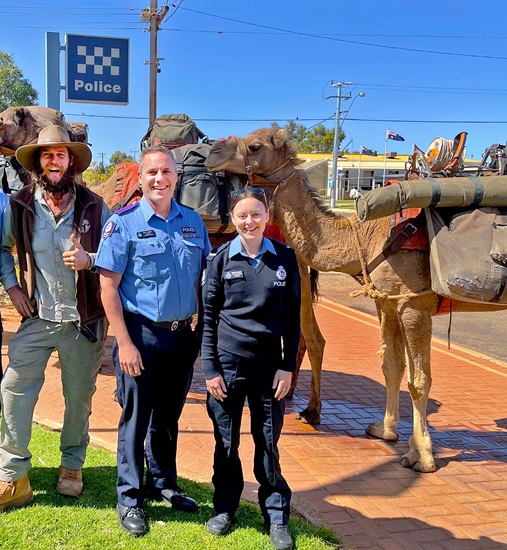 A recent joint Chaplain and Injury Coordination and Support Services (ICSS) regional deployment involved staff visiting police stations throughout the Pilbara, speaking with officers face-to-face about the support services available to them.

As they were leaving Meekatharra Police Station, Chaplain Paul Trimble and ICSS First Class Constable Bec McCready encountered a man with four camels outside and wanted to know more.

After a short conversation they discovered ‘John the Camel Man’ had initially started out with an idea to leave his job, buy a camel and ride it along the coastline of Western Australia.

“The original trip commenced in 2006/7 and was planned to be a casual stroll for a few hundred kilometres down the Canning Stock Route,” Chaplain Trimble said.

“He has never stopped and continues to travel the length and breadth of Australia with his expanded caravan of four camels and a dog.

“Life in regional WA is a special experience for all sorts of reasons – as many police officers can also attest.”