The Curious Tale of The lost Camera 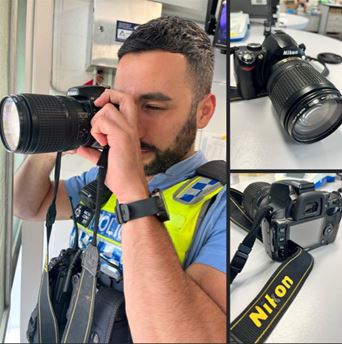 While having property handed into a police station is far from uncommon, when Esperance Police were handed a Nikon DSLR found at the Adventureland Park Sergeant Geoff Pritchard was determined to see it returned.

“As an avid photographer myself, I know how important the memories captured through photos can be,” he said.

“I reviewed the photos to find a line of inquiry since Exif data can hold an amazing amount of information/ intelligence.

“We had initially utilised social media, however other than some calls about wanting to claim Constable Nico Baisotti (pictured holding the camera) this didn’t bring us any closer to identifying the owner.”

The memory card held hundreds of shots of a family travelling across NT, SA and WA. Sgt Pritchard said having served, (patrolled as a RWA copper or vacationed) in many of the captured places they were easy to recognise.

“The last photos were taken in Esperance on 24 November, and with many tourists only staying in town for a short time I knew the clock was ticking. Fortunately the owner of the camera/ photographer had taken pics of his vehicle, a white MU-X and distinctive caravan however the plates were from Victoria and not listed on our systems.

“I contacted SOCC for assistance which was quickly provided, but remained unable to establish phone or social media details. Not to be beaten, I contacted a local police station near Montrose in Victoria where VICPOL Senior Constable Adam Leggo kindly offered his assistance.”

In an odd coincidence, SC Leggo revealed he had previously lived at the listed address of the owner of the MU-X some three years prior. He was able to provide a contact number but unfortunately the mobile phone was switched off at the time.

“Finally, patrols were conducted at local caravan parks (which we normally do anyway) with the intention of seeking out a white MU-X with Vic plates,” Sgt Pritchard said. “We had probably driven past more than 20 white MU-Xs before finally locating the correct one.

“I knocked on the door of caravan just before midnight and must have startled the occupants. After explaining that we had his camera, the owner Adam Palazzolo, was ecstatic saying they had tipped the caravan and half the town upside down in their own attempts to find it.”