You know you're a country cop when... 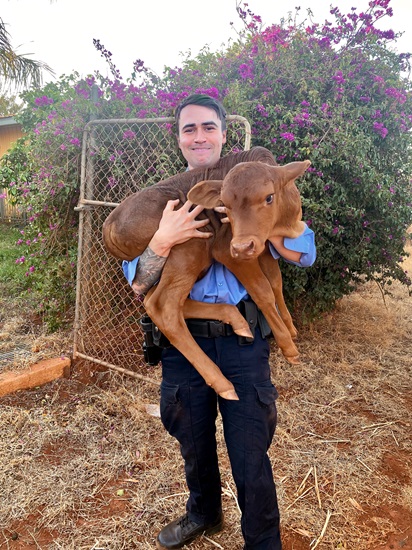 Laverton First Class Constable Mark Lang was driving back from Kalgoorlie recently and noticed a lifeless cow on the side of the road with what appeared to be a baby calf next to it.

He felt compelled to stop.

“I pulled over to see what had happened, scaring off an eagle perched on the cow to check on the pair,” he said.

“The mother was definitely deceased with the one week old calf curled up next to it. I knew straight away I had to try and save it.

“I called my fiancé (who also works at Laverton Police station) straight away and told her what I had found. She immediately gave me advice and began driving my way to help (90kms). She too was certain the calf would perish if we didn’t do something.”

1/C Lang named the calf Milo and soon had it cuddled up next to him.

“Once [my fiancé] arrived I carried him to the car and we drove back to Laverton. There, with the help of local wildlife expert Eleanor, Milo was able to be looked after until the WISH Animal Rescue Team took him into their care.”

1/C Lang added that working in Regional WA has changed his life entirely.

“There are so many unique opportunities to make a difference - whether it’s within the community or rescuing wildlife - no two days are the same.”

To find out more about a diverse career with the WA Police Force, visit the Let's Join Forces website.