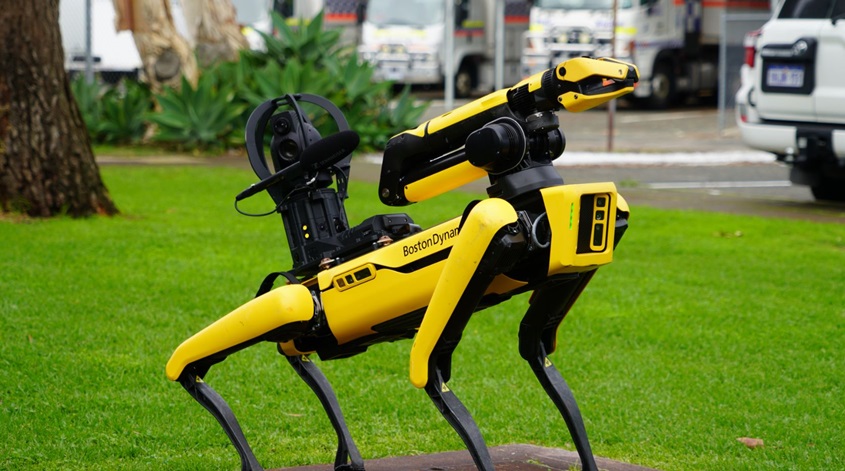 WA Police Force’s capability to respond to dangerous and high-risk situations involving suspicious items and/or armed offenders has been enhanced by the addition of new robotics technology within the Tactical Response Group (TRG).
‘Spot’ the robot is a highly agile and multi-purpose robotics platform developed and built by Boston Dynamics – a US-based global leader in robotics technology – and is the latest addition to the TRG robotics capability.
The TRG Bomb Response Unit has maintained a robotics capability for many years now, with robots typically deployed to inspect, carry and render safe suspicious items or to assist with communicating with suspects in siege situations.
Unlike other robots designed primarily for bomb response tasks, which are built on wheel or track platforms, Spot is built on four legs which provides an increased level of agility and flexibility, particularly on harsh, uneven terrain or staircases. The four-legged platform tackles those harsher terrains and obstacles with significantly more ease than other robot models.
The ‘arm’ feature on the Spot robot also provides a more flexible and multi-purpose tool to assist with a greater variety of tasks, from simple ‘pick up and carry’ tasks through to more complex tasks such as opening doors or tasks requiring both grip and dexterity usually only achieved with human hands.
Commissioner Col Blanch said the features available on the newly acquired Spot robot makes it more suitable for the diverse environments it may face in both urban and rural settings.
“This technology increases our options in respect to robot deployment in situations requiring a tactical resolution, particularly where there are items believed to be dangerous to the public. This is not a tool for day-to-day policing and will only be used in situations where it contributes to keeping our TRG officers safe while they response to high-risk, dangerous and unpredictable situations.
Minister for Police, The Hon Paul Papalia MLA, said the McGowan Government is committed to providing cutting edge resources to help keep our officers and the community safe.
“As a former Navy Clearance Diver, I have dealt with bombs and other explosive ordnance in places like Iraq. That’s why I can confidently say this technology has the capacity to save the lives of people in our community and to help keep our Police Officers safe.
“Our Police Officers are our most valuable resource. We will keep giving them the tools they need to stay one step ahead of the criminals and the threats they face keeping our streets safe.”
More...