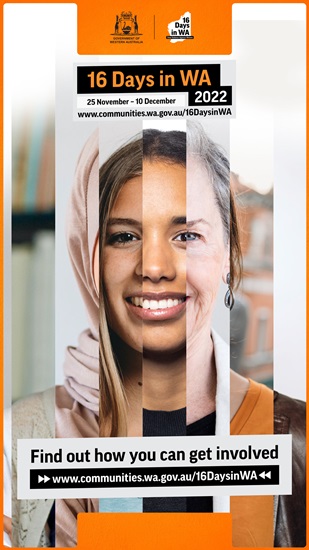 In its sixth year, “16 Days in WA” hopes to drive a change in culture, behaviour and attitudes that lead to violence against women and their children and raise awareness; increase positive actions; and highlight organisations, agencies, communities and individuals working to end violence against women.

Family and domestic violence does not discriminate. It impacts many people in the community – women, men and children of all ages and backgrounds.

“Over the last 12 months in Western Australia, 12 Family Violence Homicides have occurred with the sad reality that 8 of these were children”, Said Acting Senior Sergeant Ryan White. “This is 12 too many and it is important for everyone to stand up and support this campaign to change behaviour and raise awareness of Family Violence.”

Western Australia Police Force will be participating in the campaign by lighting Police Headquarters Orange for the duration. The colour orange is designated by the United Nations End Violence against Women Campaign.