People of Diverse Sexuality and/or Gender

The WA Police Force support and promote the reporting of crime committed against people who identify with the diverse sexuality and/or gender (DSG) community.

Although not formally recognised under the Criminal Investigation Act 2006, the WA Police Force understand that hate based crime against people who identify as DSG may significantly impact upon the victim, the victim’s family or social network as well as the community as a whole.

The WA Police Force meet with key community groups and venues that provide services to people who identify as DSG. The purpose of the meetings is to increase engagement between police and these groups as well as inform and advise one another on issues related to policing and justice which can then be shared with the DSG community.

Fear of reporting a crime

The WA Police Force acknowledge barriers that may impact upon some members of the DSG community and their ability to engage with police. These barriers may include:

This has resulted in a significant reluctance by people from DSG groups to report crimes perpetrated against them.

Originally the group started as GALPEN, (Gay and Lesbian Police Employee Network) and was inspired by a similar police community in Victoria, founded in the early 2000’s by a dedicated committee. It was created to protect gay and lesbian police employees from discrimination and provide a safe place for them to meet, connect with the community and share their stories.

In 2021 the group changed names to WA Police Pride, which is contemporary and inclusive of all Diverse Sexuality and/or Gender (DSG) employees. Now, WA Police Pride has become a network of DSG staff and allies to: 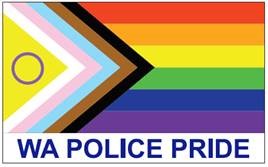